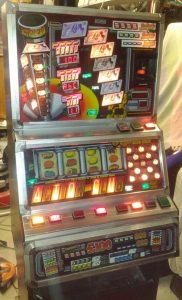 Action Club
Some of the fruits have numbers on them.  These numbers light up the letters spelling out ACTION CLUB.  Has a feature hold where the lit lights are held for the next spin.

Criss Cross Cash
Two lines of coins will light up one horizontally and one vertically.  Where they intersect when you press the gamble button will be the amount you win.  You do get a chance to gamble that amount up.

Action Cash
Top left corner.  Coins light up starting at 50p and then incrementing by 50p all the way up to £5.  Alongside the coins is the payout which shows how much per pound you will get by taking the feature.  So for example if the coins are on £2 and the 20p in a pound option is lit you would win 40p.  Feature can be won when the Action Cash button is lit.  Good way of keeping a player playing with the aim to build up the Action Cash feature to the max £5 and the full value where you then move onto the notes on the top right corner and you have a Climb Yes No gamble.  You have 3 attempts at each note to get select yes to move onto the next note.

Money Pots
The machine has 3 pots.  Mini, Minor and Major.  The Mini pot seems to go up to £1, Minor pot value will go up to £10 and the Major pot to whatever the Jackpot is.  When the machine initialises these pots are set and as game play goes on they are incremented.  Only won the mini pot so far and it pays out instantly.  It also always seems to pay out £1 no matter what the value of the pot is, it lights up an extra light and increases the value to £1 then pays out.  The mini pot is won by getting 2xpot symbols next to each other, minor pot 3 pot symbols and major 4 pot symbols.

Respin
Some fruits have a respin logo on them.  If you haven’t got a win and a fruit with respin is in the winning line then the reels will spin again when you press start giving you a free go.  Good thing about respin is that the Action Club feature is always held.